This recruit has undergone formal social media training since January. It’ll soon be time to earn my wings and fly the coop.

There are scores of theories, methods, and tidbits that I’ve picked up, and there’s even more that I’m learning. That’s the catch with technology and communication, you’re never done evolving. 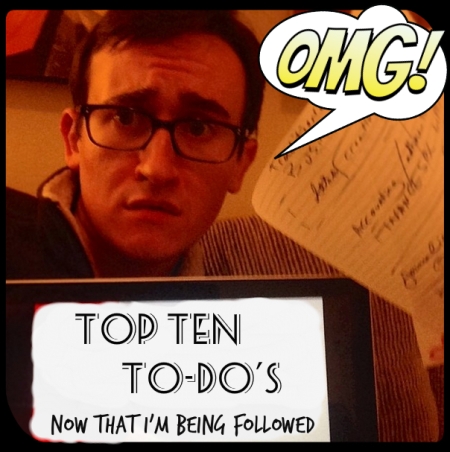 8. Follow-up on organizations or individuals that I’ve previously mentioned in interviews for future pieces.

6. Track how people get to this site and examine if and why they stick around. (I’m talking bounce rate, baby.)

4. Claim username on major and minor social sites via NameChk (Thanks for the tip, Glen Thomas!)

3. Tweet more verbs to gain better traction and figure out who should be following me (and vice versa).

2. Keep raking in FourSquare mayorships. My work and a restaurant have been conquered, yet I’m still after you, John D. of Central Gardens.

And the final social media goal?

1. “BE AWESOME!” courtesy of Kid President

Businesses live and die by big data. In fact, there’s so much content production (2.5 quintillion bytes per day according to IBM) that we can’t begin to make sense of it.

However, metrics and optimization tools are here to help us. As a new blogger, I don’t have to spend my day counting the different IP addresses that hit my site. WordPress magically aggregates the number of unique views and slices and dices them to my liking.

Reporters don’t have to scour through 2.9 million Google results pages to find an acceptable definition of “quintillion.” They can mostly trust the first page because search engine optimization (SEO) terms push the salient sites to the top.

Metrics have enabled us to analyze, infer, and interpret large quantities of information. Metrics have shown newsrooms which headlines spike traffic. And metrics have infatuated leaders to the point where decisions can be made based solely on numbers.

If data is available, it should be studied. Highly clicked stories can let an editor know what’s resonating with people. This is especially helpful for news outlets who are still trying to determine how to monetize operations as advertising and subscription revenues have decreased.

According to a study by Nikki Usher, Al Jazeera, the Middle Eastern media network, has captured the attention of millions (e.g., 220MM households), established itself as a notable news source, and grown rapidly over the last 18 years, all while being financed by monarchs. i.e., “They got money.”

To some, a news organization being owned by rich, powerful people sounds alarming, yet it’s worked for decades.  Around the world, readers have trusted the San Francisco Chronicle, the Wall Street Journal, and CNN despite the names Hearst, Murdoch, and Turner. (Albeit, Al Jazeera’s financiers are also government leaders.)

As a result, Al Jazeera has been insulated from the economic penalties associated with being a news organization. It doesn’t risk losing readers from the creation of a pay-wall. It doesn’t have to compromise editorial decisions to only produce stories that will guarantee a bump in web traffic. And its staff have the luxury to focus on what they want to do: report the news.

Is it worried about profits? Of course! But execs and managers keep track of the bottom line. While Al Jazeera is in a plumb position to ignore perilous economic effects, it still keeps up with metrics. Usher found that individual reporters want to see who’s reading what. Managers want to see what audiences want.

Even if Al Jazeera’s modus operandi seems vague to others, it clearly understands that measuring engagement is critical. Because of social media, viewers can tell companies what they like and dislike. Yet, direct conversation is not the only way to communicate.

Everyday, we interpret emotion and feelings from nonverbal body language. Likewise, news organizations, journalists, and bootstrapping bloggers infer a lot from metrics. By tracking the behavior of users, we can stay one step ahead in this content-saturated world.

This week, Tennessee state senators considered a “religious freedom” bill similar to the one that passed Kansas’ House of Representatives: legislation that empowers business owners to refuse services to potential clients, especially gay ones.

Soon after news of the legislation sponsored by Senator Brian Kelsey, a Republican that represents parts of Memphis and Shelby County, was made public, a local restauranteur and chef, Kelly English, got political. Once English learned about the bill, he posted his dissent to Facebook:

And what happened next can best be explained by Clay Shirky in Here Comes Everybody. He described how barriers to collective action have been removed because of technology. In 2007, American Airlines passengers and many other fed-up frequent flyers successfully lobbied for the Passenger Bill of Rights after eight hours on the tarmac broke the camel’s back. Dissatisfaction and organizing via social media sparked Congressional change. (Today, passengers have the right to deplane if they’ve been sitting on a tarmac for more than three hours.)

Chez English instantly became a social media influencer by encouraging others to follow suit and vehemently rebuke the bill. And rebuke they did! Online protests, trending hashtags, and calls to action flooded posts and networks. (See Mashable’s engagement tips for help.) This resulted in two key developments: Senator Kelsey dropped his sponsorship of the bill, and the legislation was indefinitely sent to a subcommittee for the remainder of 2014.

While traditional news organizations delivered the information, the scene was filled with “alternative voices.” Not media outlets or the powers that be. We’re talking about the hoi polloi of the Internet who got offended and spoke up. While legislators and the bill’s supporters could chalk this up to public griping, English’s camp could liken it to an Egyptian revolution.

Score for this round? 1-0 with “No Bluff” English in the lead.

You’re 26. You live in Midtown. You boogie downtown. You go to tweet ups and meet ups. You volunteer. You happy hour. You hum the blues. You grit. You grind. You are Memphis.

So, what?! Along with the thousands of other folks? I’ve never been shy of the bandwagon, so it’s refreshing to see what will hopefully evolve from a cultural fad into lasting civic pride.

That pride is palpable, and there are entire sites dedicated to it. Let’s review a few: Choose901, I Love Memphis, and theGRIND.

Choose901 offers a robust terminal for navigating the city. Whether it’s restaurant picks, prominent local blogs, or job openings, you can find many up-to-date tidbits. Choose901 is more down-to-earth than an “official visitor’s guide” in that it includes the most interesting part of our city: the people.

The I Love Memphis blog is operated by the Memphis Convention and Visitors Bureau and one of its staff: full-time blogger Holly Whitfield. The blog’s extensive posts span the gamut from Elvis-related to highlighting local causes and needs (Project 50). I Love Memphis has been an activity portal for locals and visitors since its founding in 2009 by Kerry Crawford, and it’s still charming.

theGrind is an online magazine published by students of Rhodes College that launched last month. It presents profiles of residents, events, art, music, and photography that is unique to the city. theGrind’s crisp layout and striking imagery allows the reader to nearly feel the pulse of the city through the lens of Midtown millennials.

Super Social: Choose901 and I Love Memphis do an excellent job of engaging readers through social networks. @Choose901 recently had a t-shirt promotion where it announced a code via Twitter for people to purchase an exclusive run of shirts. They sold out faster than a Justin Timberlake concert. @ILoveMemphis has done an excellent job of responding to reader questions and sending timely reminders about events. @TheGrindMemphis is still working up its Twitter following, yet its Facebook page is loaded with content and has more than 1,000 likes.

This trio promotes Memphis and provides a service to the city. These sites are more than a billboard or brochure, they engage and listen to their audiences through social networking and fun promotions. While it may be confusing to some to see multiple Memphis-centric sites popping up, they each have a niche to fill for our natives, transplants, and passerby. Kudos to each of you and keep the hometown love comin’.

“Find a job. Find a date.” Memphians have done both at events hosted by Undercurrent, a free networking organization that brings together more than 100 twenty and thirty-somethings each month. “We’ve been laser-focused on what we do best: creating a social space for people to make meaningful connections,” said Patrick Woods, the founder of Undercurrent.

Local Gastropub served as the downtown venue for the first Undercurrent event of 2014, which marked the sixth in the series.  Beer flowed freely from the communal table taps as newcomers and veteran attendees greeted one another. They stood shoulder-to-shoulder similar to a New Year’s Eve countdown, while the proximity provided a respite warmth on the 20-degree Monday night.

Millennials are not the only ones involved, companies have also found it beneficial to align with Undercurrent. “It’s an H.R. decision for companies; the city needs to attract and retain young talent,” Woods said. Launch Tennessee, Start Co., and Christian Brothers University have sponsored previous events.

Chase Gil, a manufacturing engineer at Smith & Nephew, recently returned to Memphis from Fort Lauderdale for his career. “I didn’t realize how much Memphis had to offer for twenty-somethings, let alone that Midtown was home to many places that were strikingly similar to where I would spend my free time in Florida,” Gil said.  This was Gil’s third time to attend Undercurrent. “I love the concept, since it is encouraging the development of connections with other like-minded people in our city,” he said.

When people purposely want to engage with one another, the possibilities are aplenty. Alliances forged from these face-to-face encounters could later result in big-screen ventures. Two filmmakers in Memphis met at Undercurrent for the first time and have since considered collaborating on a project, according to Patrick Woods.

Whether or not another Bluff City film surfaces, Undercurrent will “continue to produce excellent events…that focus on connecting big ideas,” Woods added. 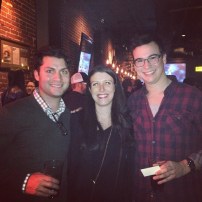 The images were pulled from Undercurrent’s Storify. To learn more about Undercurrent and the upcoming February event, follow @GetUndercurrent or visit the Facebook page.